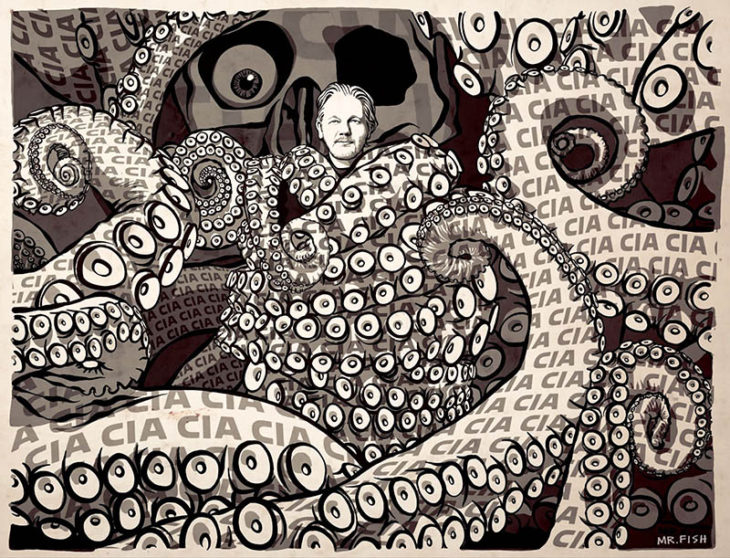 A note from the publisher.  I read and watch a lot of news. Every once in a while it simply becomes too much to bear and I taper back on it. The insanity, the horrors, the injustices, and the promises of much more to come can cause me to become cynical and somewhat depressed so I simply need to cut it out for a while. That has been the case for the last couple of weeks but I can't stay away but for so long. So here is a list of new articles. It is extremely important that everyone is aware of these things and even more important that those who can will act on it when possible. Unfortunately, the majority of us does not have a clue and could care less as they take their ever more precarious existence for granted.  __Robert Heston

WATCH: The Voice of the People on Assange

The UK Could Be on the Way to Its Third Prime Minister in 3 Months
BY: Sasha Abramsky, Truthout

Israel Authorizes Military to Kill Palestinians With Drones in the West Bank
BY: Marjorie Cohn, Truthout

'The Rent Is Too Damn High': Activists Respond to the US Housing Crisis
FRAN QUIGLEY

The Wealthy: A Greater Threat to Florida Than Hurricanes
SAM PIZZIGATI

Biden’s Broken Promise to Avoid War with Russia May Kill Us All
BY MEDEA BENJAMIN - NICOLAS J. S. DAVIES

Death by Nationalism?
BY ROBERT KOEHLER

Christian Nationalism is Like a Cancer, But is it Benign or Malignant?
BY NICK LICATA

Can the Fed Control Inflation With Just Rate Hikes?
BY DEAN BAKER

The Media Finds Its War
BY BRAD WOLF

Saudi Arabia Calls Out US Bluster
By M. K. Bhadrakumar

Destroying Europe? Is Washington Behind the OPEC Decision to Cut Petrol Output? Sabotaging the E.U. Economy
By Peter Koenig and Press TV

Who Did It? More Evidence Points to US-NATO Sabotage of Nord Stream
By Kurt Nimmo

Lavrov Says Russia Open to Talks with the West, US Dismisses His Comments
By Dave DeCamp

“You know, when police start becoming their own executioners, where’s it gonna end? Pretty soon, you’ll start executing people for jaywalking, and executing people for traffic violations. Then you end up executing your neighbor ‘cause his dog pisses on your lawn.”—“Dirty Harry” Callahan, Magnum Force

The Treason of the Intellectuals
By Emanuel Pastreich

Bolton Calls for Putin Assassination: Imagine the U.S. Response had a Russian Official Called for the Assassination of Biden
By Kurt Nimmo

The U.S. Is Leading the World Into the Abyss
By Edward Curtin

U.S. Buying $290M Worth of “Anti-Radiation Drugs” for Use in ‘Nuclear Emergency’. “Billions in high-tech Weaponry to Ukraine to Strike inside Russia”
By Chris Menahan

The Federal Reserve Cartel: The Eight Families
By Dean Henderson

How to Turn the Tables on Tyrants Waging the Economic War
By Dr. Joseph Mercola

Here Comes The Open Revolt: A Reeling Europe Lashes Out At The Fed For “Bringing Us To A World Recession”
By Tyler Durden

250 Scientists Are Still Warning the Public about Wireless Earbuds due to Cancer, Neurological, and Other Health Risks
By B.N. Frank

A Dystopian Surveillance State is Rising in India
By Aparajita Ghosh

US Heating Costs Expected To Surge This Winter
By Tyler Durden

Update on October 8 Rally For Julian Assange
By Neenah Payne

WATERS CONCERT: The World As It Is
By Joe Lauria

Public Officials: How to Hide Evidence That You Are Being Bribed
By Janet Phelan

US Supreme Court May Legalize Election Theft
By Marjorie Cohn

The Irrational War on Drugs
By Vijay Prashad

We’re Being Pushed Toward Nuclear War On A Fiction: Notes From The Edge Of The Narrative Matrix
Caitlin Johnstone

How The Blood Is Kept From View
Nathan J. Robinson

‘Preposterous’: FDA, CDC Authorize New COVID Boosters for Kids as Young as 5 — With No Data, No Independent Review
By Dr. Suzanne Burdick

Is the mRNA Vaccine-Induced Immunity Inheritable? A Preprint Study Shows It Is.
By Dr. Monica Giannelli and Lora Hammill

Is the U.S. Blood Supply Tainted? Do COVID-19 Vaccines Cause Blood Abnormalities?
By Children’s Health Defense

You Can Always Dream 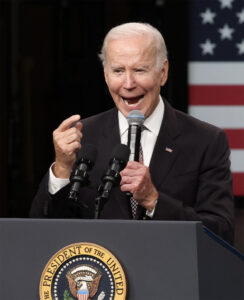 Last night I had a dream. In the dream I woke up to the banner headline: BIDEN ARRESTED. It was only a dream, but was most satisfying, as it made vivid and emphatic what must happen to correct the dreadful tendings of the criminally psychopathic enterprise that our government has become.

The gang behind the shabby and absurd pretend-president — a figure as comically macabre as the plastic effigies of the undead who crowd American front yards this time of year — is not content with running the country into a ditch. Lately these rogues and degenerates are making noises about blowing up the world.

The autumn days dwindle down to signal events that will overturn this wicked enterprise. The yellow-and-blue flag of Ukraine can’t compete on the lawn with tableaux vivants of werewolves, skeletons hung with rotting flesh, radioactive burn victims, hooded demons from hell escaping their graves, and tortured souls shrieking from the various zones between this world and perdition. America is expressing itself with stunning verisimilitude to the onrush of reality: maybe we’ve had enough of romancing death.

That’s the developing lesson of our fiasco in Ukraine. The past three weeks, the US and its vacillating NATO cohorts issued a set of challenging insults aimed at Russia, the designated “villain” in the concocted Ukraine melodrama produced-and-directed by the Party of Chaos as a diversion from our own acute problems at home.

First, the sabotage of Nord Streams One and Two. Maybe a US op, maybe UK, maybe Poland in the mix somewhere. Obviously not Russia, despite all the clumsy propaganda on CNN. What was the idea there, exactly? To deprive Russia of a natgas export market? Guess what? The destruction of the Nord Streams leaves plenty of natgas for the other 70-percent of the world that’s not Europe. And plenty of natgas for Russia itself to develop industries in an import-replacement program to offset the idiotic economic sanctions recklessly imposed on it by “Joe Biden” & Company.

Not such a good outcome for Germany and the EU, though. They will, first, freeze through the winter with idle furnaces and, second, starve in 2023-24 from a lack of fertilizer (made from natgas in the Haber-Bosch process). Oh, and no more industry for you, Euroland. It’s back to the jolly rigors of the Twelfth Century, planting barley and peasecods with pointed sticks while wolves roam the streets of your depopulated cities.

Next, days ago, the attempted destruction of the bridge over the Kerch Strait in the Black Sea, connecting the Crimean Peninsula to mainland Russia. Nice try. Didn’t work. Both the railroad lanes and the motor lanes are operational again. Who did it? We’ll know soon enough.

Note also: the ongoing shelling and bombing of Ukraine’s giant nuclear power generation plant at Zaporizhzhia — admitted by US officials to be a Ukraine operation in a September 13 New York Times report. Yes, that was the bright idea of America’s advisors to NATO and Ukraine: lob explosives into the biggest nuke plant in Europe. See what happens….

Note also that the main human object of all this US, NATO, and Ukraine mischief is the leader of Russia. That’d be Vladimir Putin. One must admire Mr. Putin’s prudence and fortitude in the face of such provocative effrontery. So far anyway. Now, it appears that he has had enough of these shenanigans. For seven months, the strategy behind Russia’s Special Military Operation has puzzled the West. Why so tentative? Why not just use Russia’s manifest superiority, air power especially, to go in and bust the whole joint up? Do what the US has done in places like Libya and Syria?

Forgive me for repeating what I’ve written more than once before: Russia will not benefit from having a broken, failed state on its doorstep. Such a situation would clearly just invite more international hugger-mugger. Rather, Russia will benefit hugely from having a neutral, functioning Ukraine next door, a state with ample agricultural resources that could plausibly feed its people and live in peace, perhaps even enjoy special trade privileges with its bigger neighbor to the east… a Ukraine that would be a geographical buffer between Russia and what is apt to be a very disorderly and distressed Western Europe on the other side.

The Ukrainian leader, Mr. Zelenskyy, capped off the weeks of sabotage by appealing to the US and NATO to conduct “preemptive nuclear strikes” against Russia proper. That’ll work in Ukraine’s favor, I’m sure. He promised to call German Chancellor Olaf Scholz and make the pitch for NATO jumping into the action on the ground. (And with whose army would that be?) Such cheek from this desperado! Going mad-dog is probably not a sign of confidence.

The action is an overture to a strategic shift. Russia aims to speed up the game clock, consolidate its ownership of the Donbas provinces, destroy Ukraine’s remaining military capability, bust up enough stuff to perhaps prompt the Ukrainian people to ask whether continuing to follow Mr. Zelenskyy’s gang is a good idea, and leave no alternative to talks that will leave Ukraine neutralized. Mr. Putin is calling “Joe Biden’s” bluff. All of this could have been avoided, of course, if the maniacs of America’s deep state had simply abided by the promise made thirty years ago to not expand NATO. What part of that deal didn’t we understand? Apparently, all of it. On purpose. Because we have acted with conscious and arrogant dishonor.

Of course, our “president” could commence that nuclear war he affects to be so avid for. It would be a fitting career-capper for the Ol’ Dawg. The show-runner behind all this needless mayhem, former President Barack Obama, reminded us a while back: “Don’t underestimate Joe’s ability to fuck things up.” Roger that, BHO! Which gets back to that dream I had of the headline: BIDEN ARRESTED. It was good, but not enough. How about : BIDEN, OBAMA, AND 639 FEDERAL OFFICIALS IN NINE AGENCIES ARRESTED. What a strange moment in our long and steadfast history as an orderly Republic that would be. And yet, what a perfect ending to these years of perfidy and travail.